As a lover of words and the power of language, I do adore a good generalisation. You know, the sort of wild statement that often sounds vaguely possible but which turns out, on closer examination, to be about as plausible as the fact that I’m writing this while riding a diamond-encrusted elephant. Which is why politicians love them, of course… and, generally, we let them go.

I’m not alone in my passion; I read, many years ago, a piece by the early-twentieth-century US humorist James Thurber. He had a fine collection of his own, ranging from the blatantly untrue – ‘there are no pianos in Japan’ – to the more debatable – ‘people would rather drink than go to the theatre’.

Thurber started collecting sweeping statements as a way of diverting himself from collecting actual things, things which could get broken or stolen. Nobody will steal a wild remark like ‘generals are afraid of their daughters’ or ‘foreigners don’t fish’ and sell it on the used-gibberish market.

How about ‘intellectual women dress funny’? This is one of Thurber’s collection, and I’ve always remembered it (and tried my best to live up to it, some might say). Here. for example, are Marie Curie and an assistant, both ‘dressed funny’: 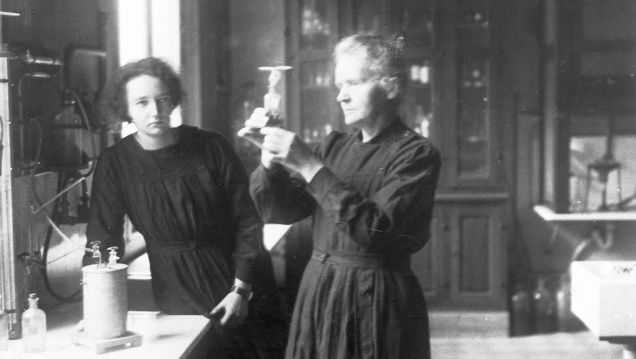 I’ve started to collect them myself, and am particularly fond of ‘orange has no place in the garden’. Eh? Why? When I did ask my informant – this has become my habit now, always challenge a daft generalisation – the only reason she could come up with was that she, herself, didn’t like orange. All that means is that orange has no place in her garden, I guess. But it sounds so much more impressive, so much more important, has so much more weight if it’s framed as a sweeping generalisation rather than a simple personal preference.

That reminds me. Here’s another contribution appropriate for International Women’s Day, which this is. The same person also came up with ‘women’s voices sound funny when they sing’.

I’m not quite sure what the correct response is to remarks like this. In the past I’ve been tempted to resort to violence when told ‘only a fool reads a book more than once’ (my informant, again) or ‘you can’t trust a physiotherapist’ (guess). But I’m a changed woman, I have my collection to look after. And, in the few remaining weeks to the election, there should be plenty of opportunities.

Previous:
Happy Howlerdays
Next:
In defence of fantasy