It’s just like buses. You wait for ages and ages for a bus to come along, and then three arrive together. Once upon a time I edited a lot of books in American English, but I haven’t been asked to do that for ages (I’ve ‘translated’ food books into British English, but that gets confusing – really, any recipes need re-testing but not much chance of that being in the budget for most publications nowadays). Then all of a sudden up comes the ‘we’d like this in American English’ request again. And again. 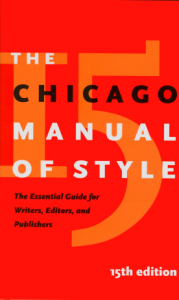 So I’ve been renewing my friendship with one of my favourite reference books: The Chicago Manual of Style.

I’m still using the fifteenth, 2003, edition – there is a sixteenth, but the changes are comparatively minimal as far as I can tell, and the number of times I have to edit in US English don’t really justify the cost. Plus, I am enormously attached to my existing copy. And that’s for a reason…

I admit it, I’m a bit of a book production slut. I’m incredibly fussy about fonts – I’ve been known to put a book back on the shelf if I don’t like the font or, rather, deem it unreadable, as some of them are. Similarly, I can toss a book lightly to one side if I find the layout offensive – cramped margins, tight spacing. And some books appear to be printed on old kitchen paper and bound by spit. Not so this. It is simply beautiful.

The paper is heavy and thick; the binding is substantial enough to cope with editorial mangling; the type is clear and readable and the layout, oh the layout, is a joy. It’s so clear. I almost feel embarrassed putting it on the shelf next to my Oxford reference books, especially the Oxford Guide to Style. (It’s a measure of the problems I have had over the years finding things in the magisterial OGS that the back pages are covered in my own version of the index.)

But, lovely though the Chicago Manual is, it’s only been of mixed value this summer. That’s because I’ve been working in what can only be described as ‘transatlantic’. Sort of west of Rockall, but not too far west.

Some things, you see, are acceptable, generally acceptable whenever I’m asked to do this, though there are subtle variations. Color, neighbor, traveled, defense – those sort of things are usually OK. Some things – US punctuation, for instance – are not, or are OK in some circumstances (punctuation within quotes) and not in others (the presence of the ‘Oxford comma’). One publisher may want -ize endings and another -ise, so you must change organise into organize, or the other way, depending. Dates can be a step too far – but you must refer to 9/11 and not 11/9: it has to be the former, because 9/11  has become the accepted term, regardless of the fact that in UK English it would be the other way round (I got that one through the publisher’s mid-Atlantic filter). And changing double quotation marks – the norm in the US – to singles is not just simply a matter of clicking find and replace, because then you miss out on the embedded quotes, the quotes within quotes where the marks are the other way round.

I’m mentioning this not just because of my love affair with the Chicago Manual of Style, but because someone said to me that ‘it must be nice, spending your summer reading books and being paid for it’. I imagine it would be, yes. And don’t even get me onto the exciting, entertaining and creative things that can happen to Word files when they’ve been through many hands and many computers.

Now, of course, I’m having problems with my English English. As it were…

Previous:
In defence of fantasy